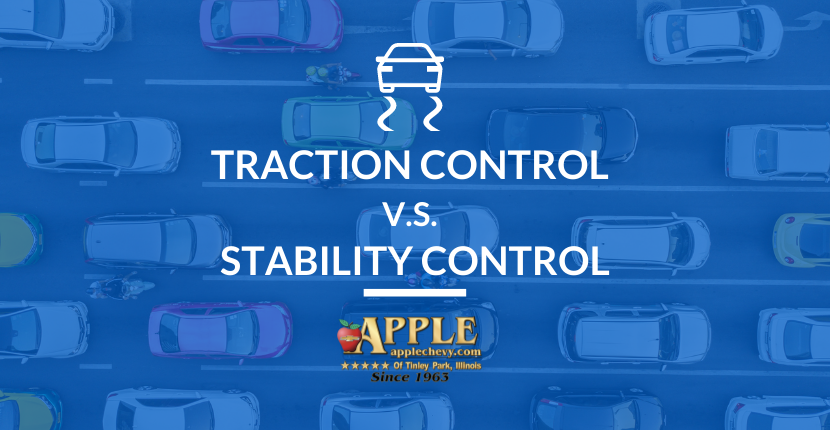 When buying a new or used vehicle, it’s important to evaluate its safety features. Many vehicles will be outfitted with either traction control or stability control. Knowing the difference can help you determine what you need and what offers you a safer ride out of the road. To learn more about these safety features, visit Apple Chevy Tinley Park!

What is Traction Control?

Traction control is an active safety feature designed to allow vehicles to make optimal use of the accelerative traction from surfaces. Traction control does this by measuring wheelspin and controlling it by using the anti-lock-braking system’s hydraulic solenoids to apply braking pressure. It may also employ the engine’s electronic throttle, fuel, or spark controls to slow the wheel’s spin. If you prefer, you can also turn traction control off generally with a button on your dashboard.

What is Stability Control?

Stability control is a safety feature that combines all of the hardware of traction control and anti-lock brake systems with several new sensors. Some of these sensors include a steering wheel position sensor, which joins the brake and accelerator pedal sensors to inform the system of the driver’s intended path and speed, and the yaw sensor, which measures how much the vehicle is rotating around its vertical axis.

Looking for a Chevy dealer near me? At Apple Chevy, we are happy to serve customers in the Chicagoland area and throughout northern Illinois and southern Wisconsin. We have a talented and experienced team of salespeople who are committed to finding you the best possible deal on a new Chevrolet sedan, truck, or SUV. We also have a terrific team of service technicians to help keep your vehicle on the road for many years to come.  Visit us to learn more about traction and stability control or other safety features today!