Electric Explained: The Difference Between the Chevy Bolt and Volt 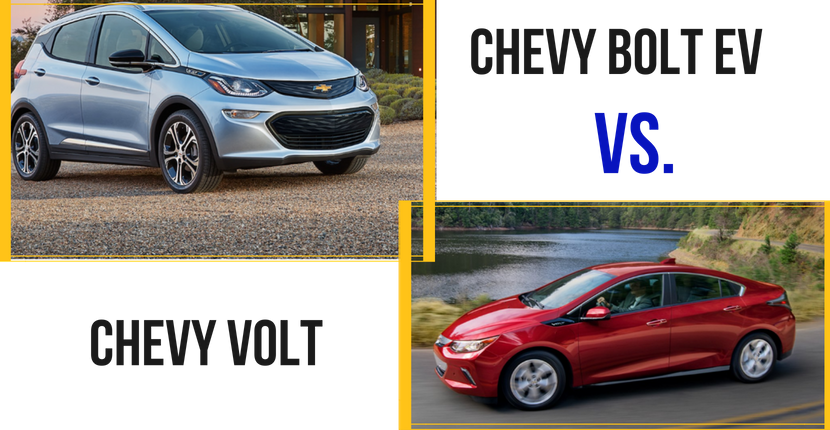 While we tend to stick to the automotive industry—it’s what we do best—Chevrolet is always connected to what’s happening in the world around us. And as a leading voice in the automaker business, it only made sense for us to see if we could reinvent the way we think about electric cars. The result? The Chevy Bolt and Volt. These two modern models surpass the competition with EPA-approved features and innovative energy-efficient construction.

But don’t let their names fool you. The two electric vehicles may share similar-sounding names, but as any Chevy Dealer will tell you, the Bolt and Volt are in two leagues all on their own.

Bolt: An all-electric car, the Bolt relies solely on electricity to move it forward. And with an EPA-estimated 238 mile range for a single full charge, the Bolt is the first of its kind to support your road trip goals. Need to charge along the way? You can download charging apps on your smartphone to locate nearby charging stations while you’re on the road.

Volt: A second-generation plug-in hybrid, the Volt is equipped with a four-cylinder engine back up for when the electric battery runs out. The sleek model offers up to 53 miles of pure electricity and up to 420 miles with a full charge and full tank of gas. Because of the engine back up, the Volt allows for longer driving periods and fewer stops at the charge/gas station.

Bolt: A lighter electric car at 3580 pounds, the Bolt produces 200 horsepower and 266 pound-feet of torque. And when you’re using a 240-volt home charger, this model only takes nine hours to reach a full charge—making it fast and simple for you to charge up and get back on the road.

Volt: The hybrid’s plug-in drivetrain flaunts duo electric motors that deliver up to 149 horsepower and 294 pounds-feet of torque to the front wheels. The other half kicks in when the battery runs out. The 1.5-liter EcoTec engine delivers 101-horsepower and stands out among the hybrid crowd due to its engine never directly spinning the wheels. Simply put, the Volt’s engine makes electricity and sends it straight to the battery.

Bolt: One of the most appealing features of the Bolt is its subtle hatchback crossover exterior. Both in shape and design, the Bolt reflects most other Used Chevy models for sale. However, the interior is where the Bolt gets tech-savvy. Even the base version of this model is equipped with a 10.2-inch touchscreen on the dashboard, Bluetooth connectivity, smartphone compatibility, and a 4G LTE connection.

Volt: With gray grill installations and a sleek, sloping body shape, the Volt has a more futuristic feel to its exterior design. But it’s not just for looks. This design makes it more aerodynamic and, as a result, much more efficient. Tech-wise, the Volt offers similar equipment as the Bolt, the only minor difference is a slightly smaller touchscreen at eight inches.

Every year, Chevrolet continues to push the boundaries on electric and hybrid driving. And Chevy’s Bolt and Volt offer drivers unique, high quality takes on electric driving in 2018. Planning your next energy-efficient road trip? Search for a Chevy Dealer Near Me or Used Chevy Near Me to find the electric model that’s best for you.