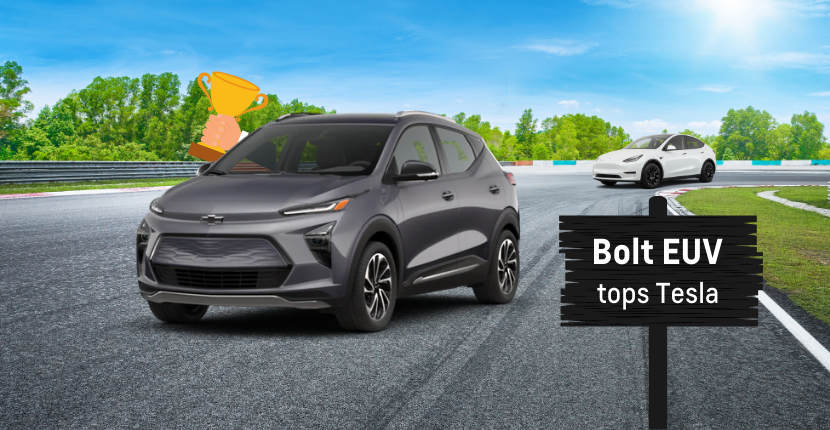 In February, General Motors introduced the 2022 Chevy Bolt EUV, an all electric compact SUV. The new Bolt EUV includes GM’s hands-free Super Cruise system and can travel up to 250 miles after a full charge. Production of the EUV will begin this spring and be available in showrooms by early summer 2021.

How the Competition Measures Up

With the EUV new to the market, some have compared it to Tesla’s newest compact SUV, Model Y. Based on the Tesla Model 3 Sedan, the Model Y is meant to be a luxury electric vehicle.

With the announcement of the Chevy Bolt EUV, the Model Y’s high price and limited availability don’t seem worth it. Those in the market for a larger electric car should consider the EUV’s affordable price and amazing features in comparison to the Model Y.

Because both the Bolt EUV and Model Y are pretty comparable in terms of quality and functionality, the major difference between the two is their price. Naturally, a large and storied company like General Motors made the price of their EV lower in comparison.

While the Tesla Model Y has a starting price of $41,990, the Chevy Bolt EUV begins at only $33,995. Just the base will save you nearly $8,000 alone. Additionally, the EUV offers additions in three different tiered packages that range between $495 and $1695. These packages include features like heated seats and a leather steering wheel. On the contrary, Tesla offers far less add-ons, including only five colors and finishes to the EUV’s seven. Even with additional add-on features, the Bolt EUV almost assuredly remains lower in price than the Model Y.

In terms of pricing, the Bolt EUV beats out the Tesla Model Y overall. The Bolt EUV is the perfect option for drivers looking for an electric SUV who don’t want to pay Tesla’s exorbitant prices.

While many features are shared across both the Bolt EUV and Model Y, there is one feature that sets them apart in particular. It’s hands-free driving technology. Only used for Cadillac vehicles thus far, the General Motors hands-free Super Cruise driving system comes with the Bolt EUV.

Super Cruise uses facial recognition technology to identify if the driver is paying attention, eliminating the need for them to touch the steering wheel while driving. The Super Cruise system can be utilized on more than 200,000 miles of highways/freeways in the United States and Canada. For these roads, the system utilizes cameras, radars, sensors, and map data to travel safely and conveniently.

The Tesla Model Y, however, is equipped with an Autopilot feature that requires full attention from the driver. For options included with the Bolt EUV, like Autopark and Auto Lane Change, you’ll have to pay an additional price of around $10,000 for the Model Y.

Comparing hands-free technology on both vehicles makes it easy to see why the best choice is the Chevy Bolt EUV.

Chevy Dealership Near You

At Apple Chevrolet Tinley Park, we have a wide selection of new and used Chevys for sale, including the new Bolt EUV. Visit us to learn more about why the EUV is the vehicle for you or check out a Chevy Bolt lease today!  Your search for a “Chevy dealership near me” ends here at Apple Chevrolet.